About The Queen's Regiment › Regimental Art › 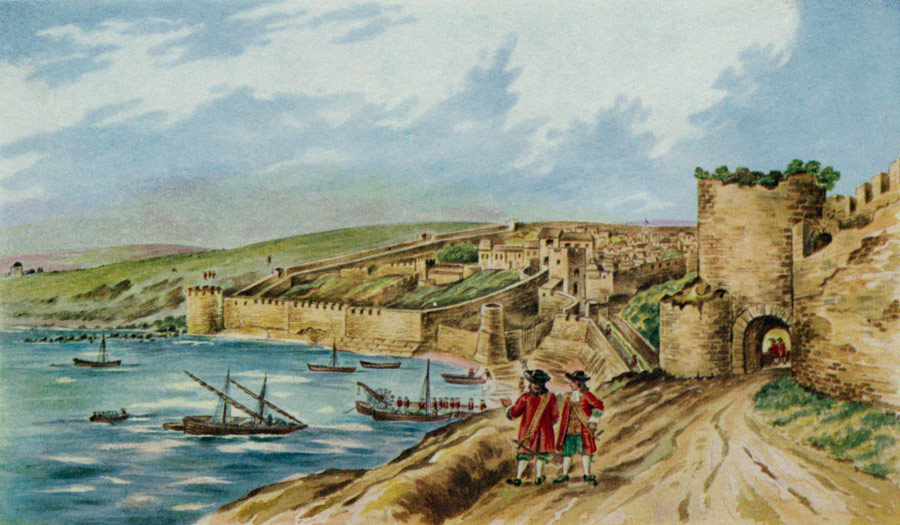 The 2nd (Tangier) Regiment of Foot.

The regiment was raised in 1661 to garrison the Port of Tangier, which when Charles II married Catherine of Braganza, he acquired as part of the dowry. 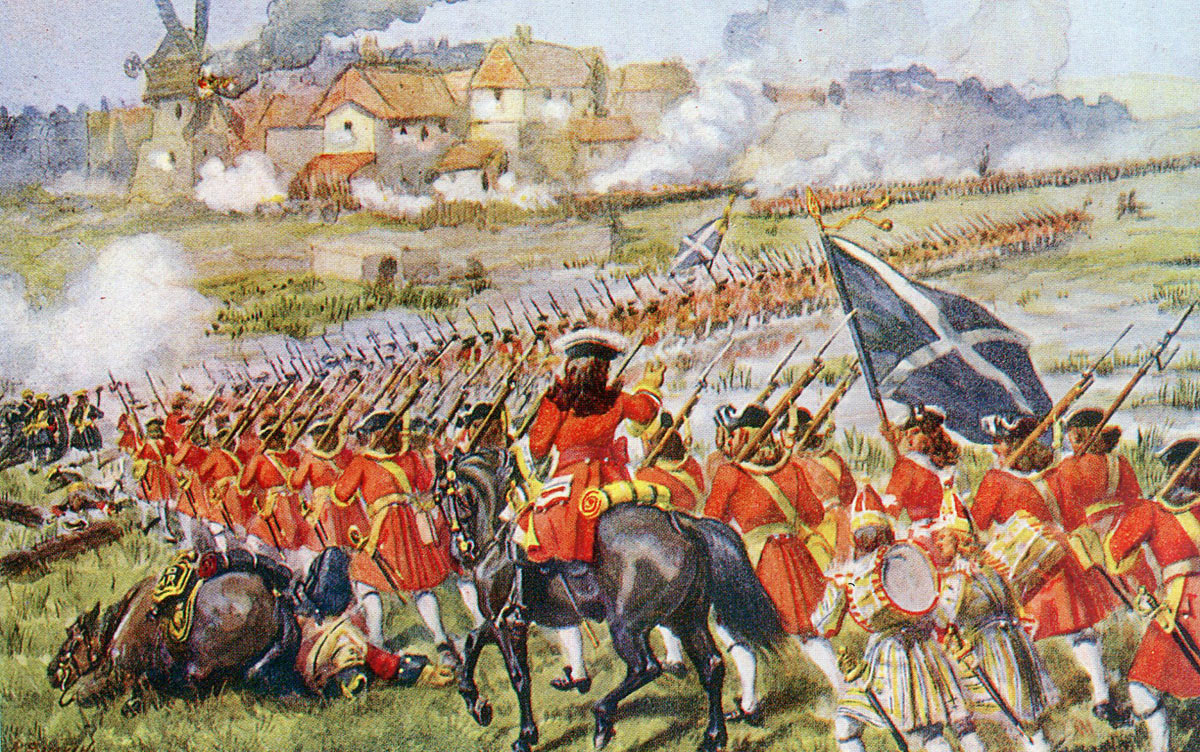 The War of the Spanish Succession.

The Buffs and the 37th Foot also fought with distinction in Marlborough’s Army, gaining the famous quartet of battle honours. 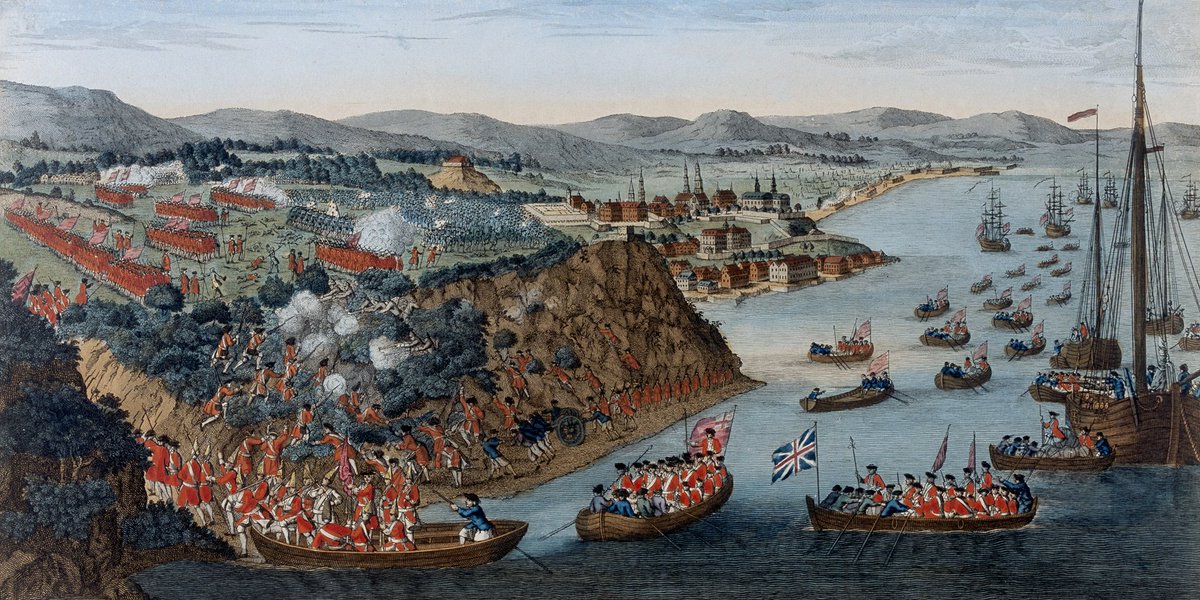 The 35th Regiment (Royal Sussex) took part in the capture of Quebec at The Battle of the Plains of Abraham (also known as the Battle of Quebec), a crucial battle in the Seven Years' War between the British and French. British troops commanded by General James Wolfe successfully resisted the advance of French troops and the battle was over in one hour, following a three month siege. 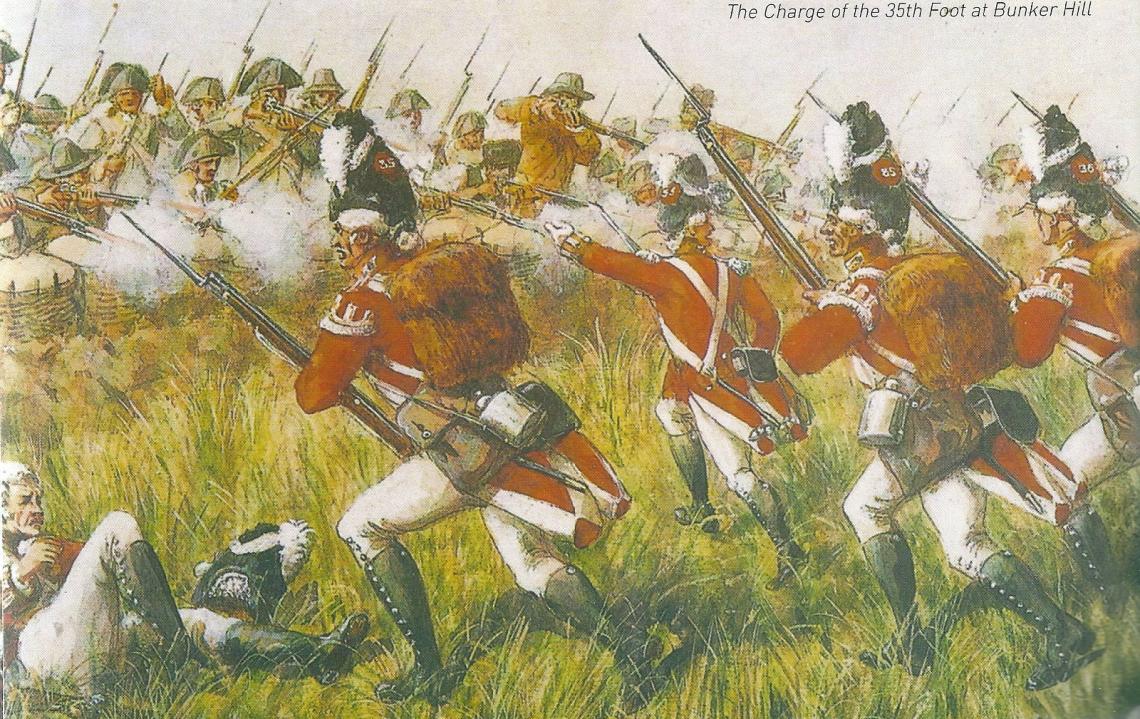 The Buffs 35th Foot defeating the rebels at Bunker Hill, Boston .The Battle of Bunker Hill took place on June 17, 1775 during the American Revolution - The second battle of the Revolutionary War. Two assaults on the colonial positions were repulsed with significant British casualties; the third and final attack carried the redoubt after the defenders ran out of ammunition, leaving the British in control of the Peninsula. 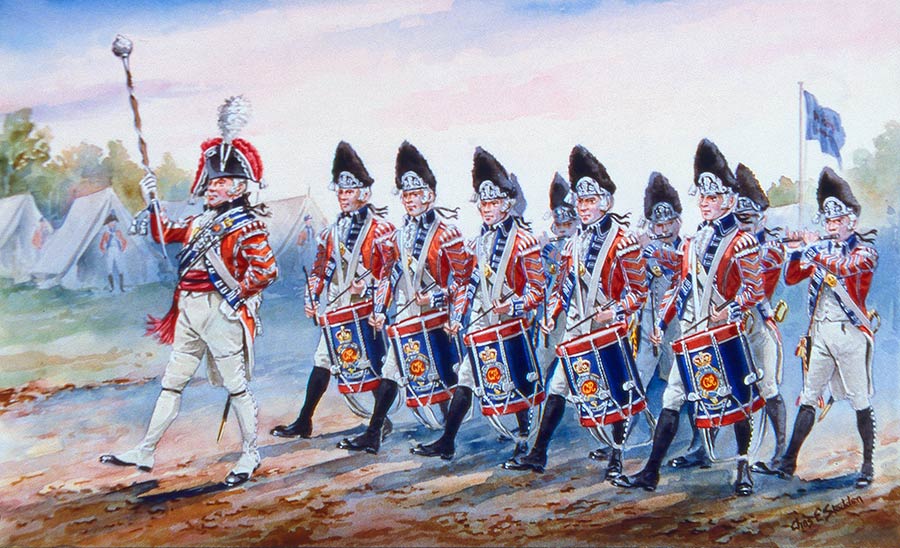 "The Death of Lieutenant Nevile" 1794
By James Frost 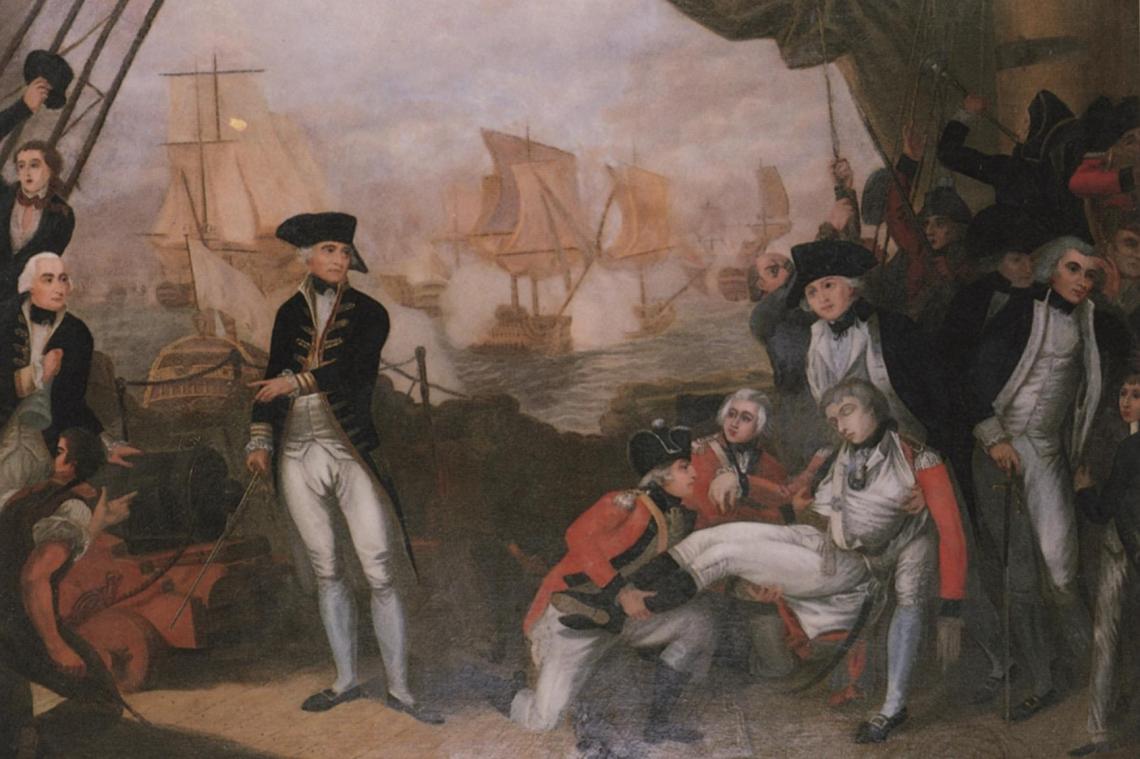 The Glorious 1st of June

Lord Howe on the deck of the "Queen Charlotte" with the group around the dying Lieutenant Nevile.

The Queen’s were awarded the Naval Crown on their Regimental Colour, as a result of their rôle in the Battle.

"The Fog of War" 1811
By Lt Patrick Anchitel Richmond Anson 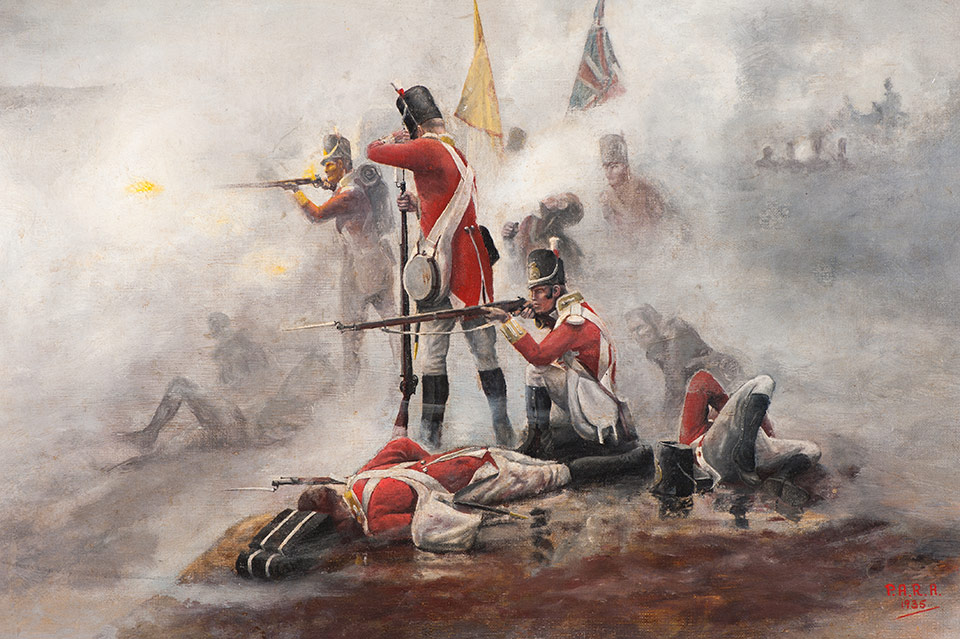 Soldiers from the 57th Regiment of foot (The Middlesex Regiment), protecting the Regimental colours during the Battle of Albuera 16th May 1811. In the smoke from the rifle fire black powder, it shows a glimpse of the bridge over the river Albuera. Colonel Inglis, CO of the 57th, was shot and as he lay propped on an arm in front of his lacerated Colours. He kept exhorting his men, ‘Die Hard, 57th, Die Hard!

"Steady The Drums and Fifes" 1811
by Lady Elizabeth Butler 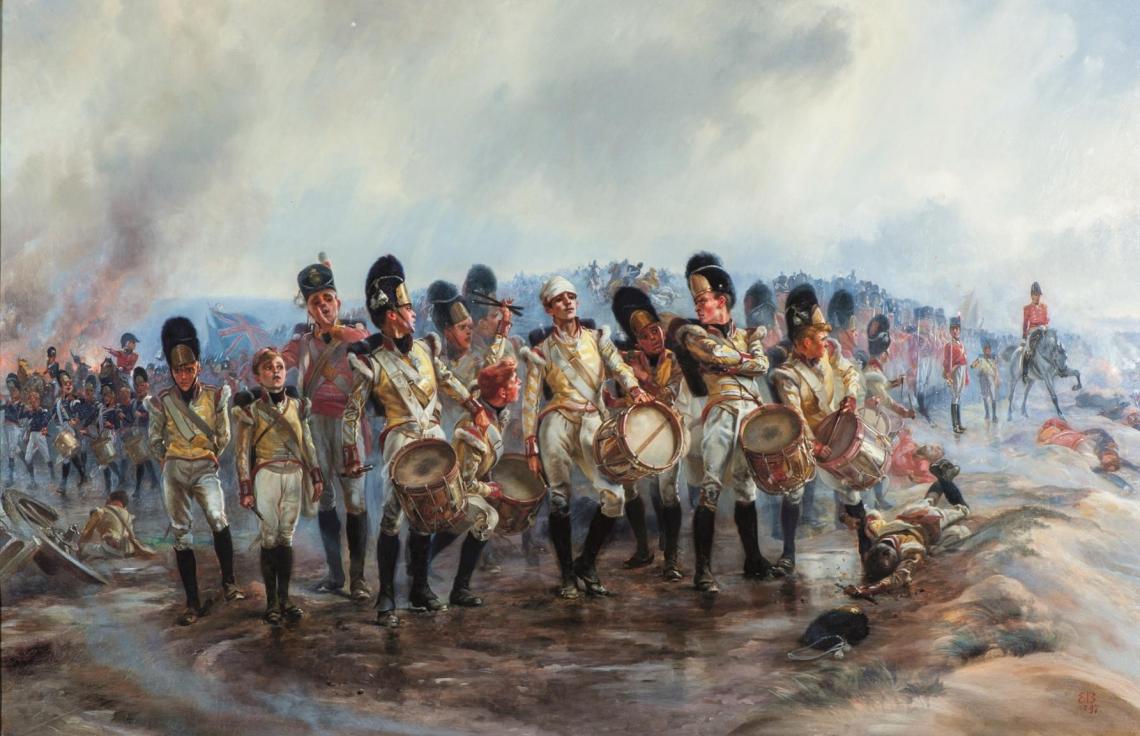 57th Foot (The Middlesex Regiment) waiting, under fire to sound the advance at the Battle of Albuera, 1811.

The painting was purchased by The Middlesex Regiment and is now in the collection of The Princess of Wales Royal Regiment. 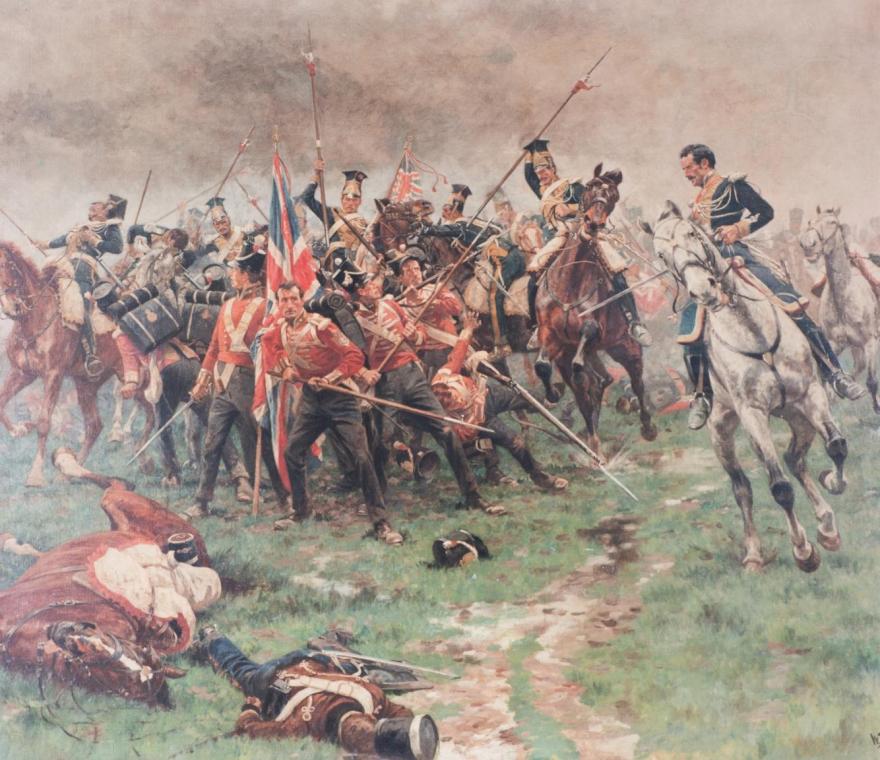 To 'The Immortal Memory'.

The Buffs (East Kent), the 31st (Huntingdonshire) and the 57th (West Middlesex) were all in Marshal Beresford’s allied army. 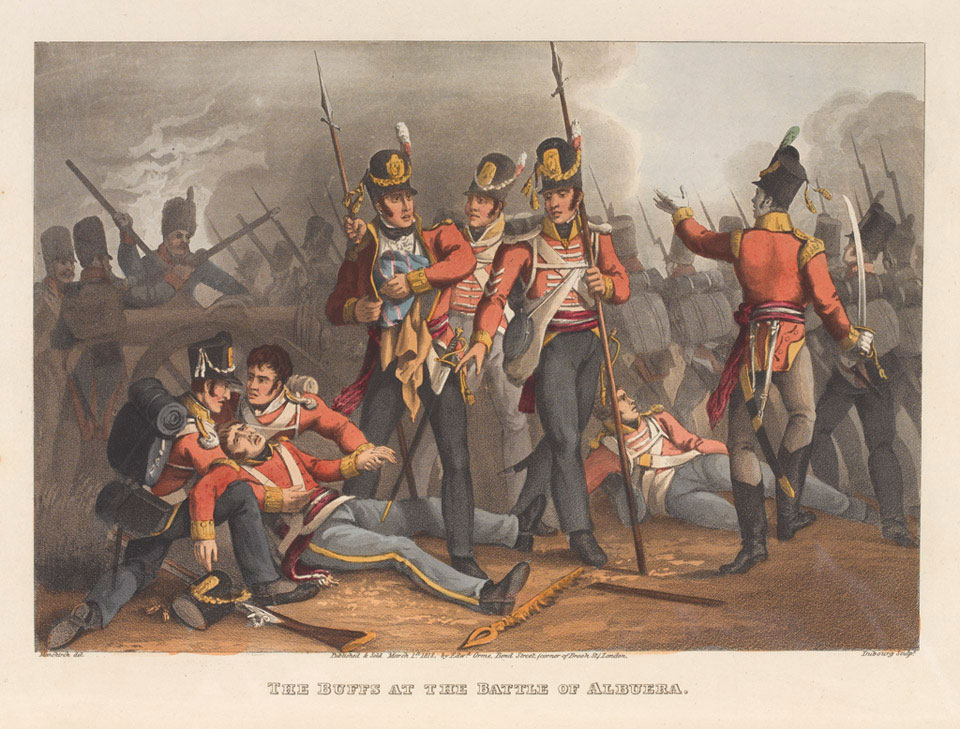 This print depicts an incident in the battle where the King's Colour of the 1st Battalion 3rd (The East Kent) Regiment of Foot (The Buffs) was saved by Lieutenant (later Captain) Matthew Latham. He managed to hold on to the flag, stuffing it into the front of his jacket. It was later recovered by a British soldier who thought that Latham was dead. Miraculously Latham survived the battle and was treated in a local convent. He returned to England, where he received further restorative surgery. © Credit: National Army Museum

"Soldiers On A March" 1811
by George Moutard Woodward 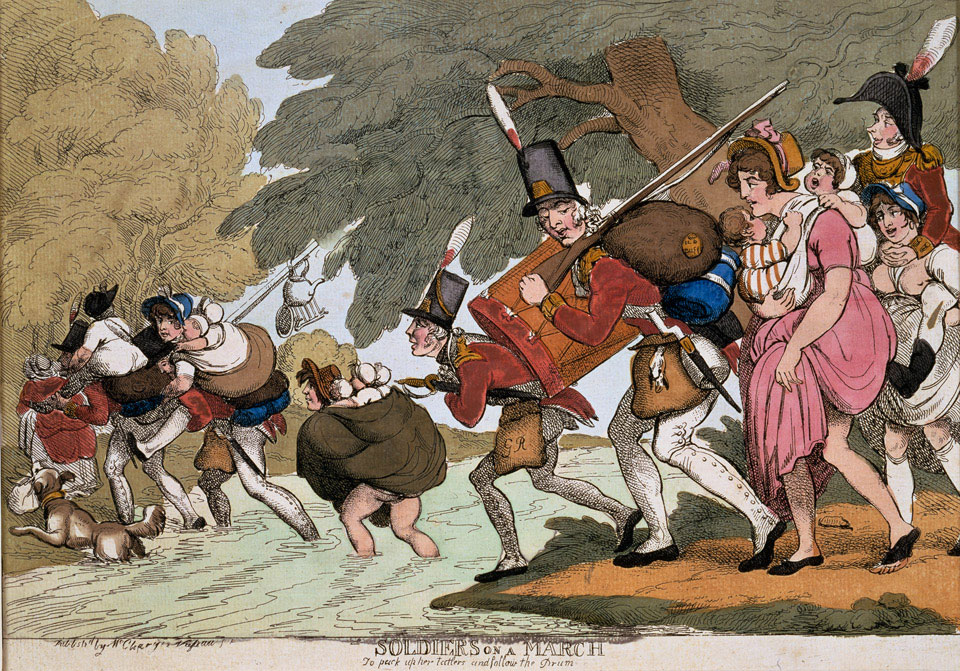 3rd (The East Kent) Regiment of Foot (The Buffs) on the march with their womenfolk and children. Only a few men from each unit were officially allowed to marry and have their wives and families accompany them. Women would have been found in almost every British military camp. Some worked as cooks, laundry women and sutlers (camp followers who sold provisions), while others were prostitutes. Credit: National Army Museum

"The Burning of The Kent" 1825
By William Daniell 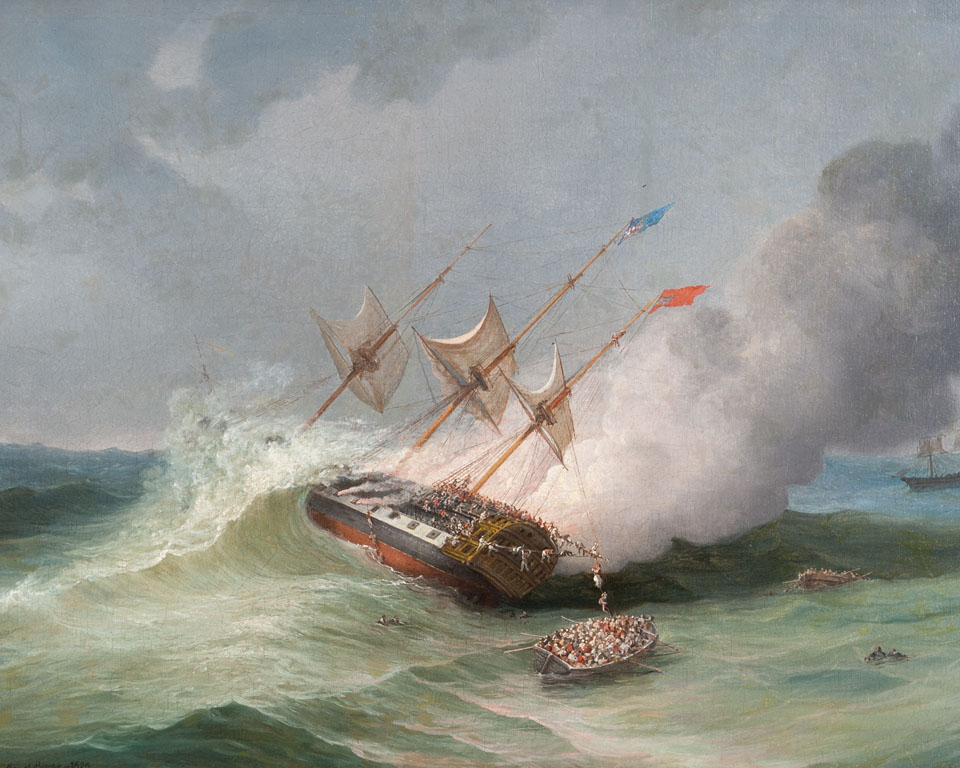 On 1st March 1825 in the Bay of Biscay, following two days of storms the ship caught fire reportedly from an accident with a naked light, igniting 100 tons of shot and shell in addition to victuals and equipment for the voyage.

At 2am the gunpowder finally exploded and that was the end of the Kent. Eighty one lost their lives.

"The Storming of Ghuznee and Kelat" 1839
By W Taylor 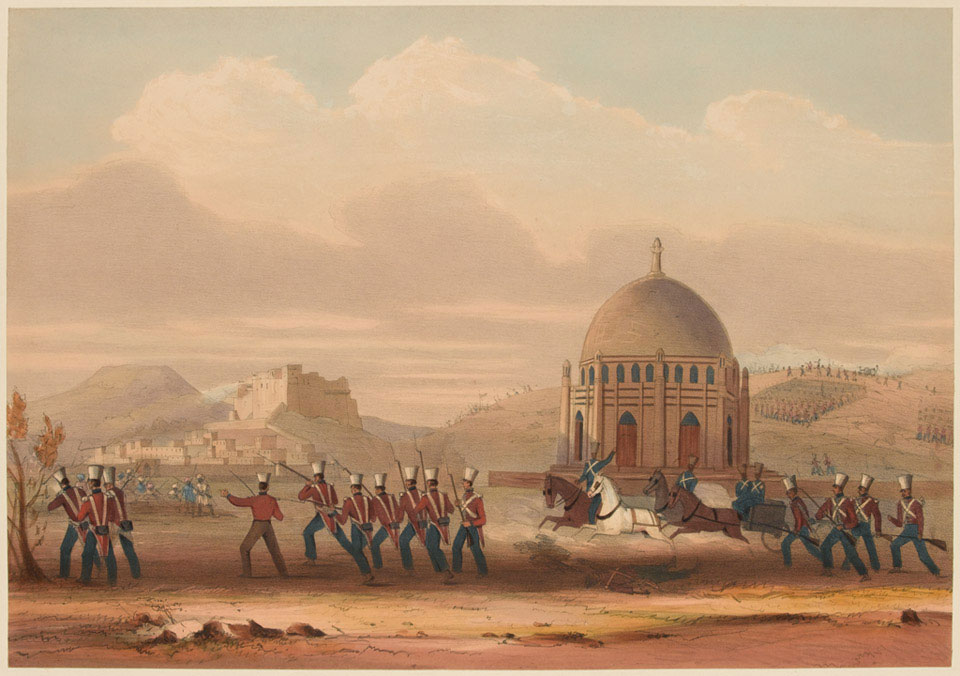 2nd Queen's Royal Regiment. In August 1839, the British made preparations to withdraw the majority of their soldiers from Kabul, believing that the 1st Afghan War (1839-1842) was won.

After fierce fighting in the surrounding hills, the walls of Khelat were successfully stormed and the city captured by the British. 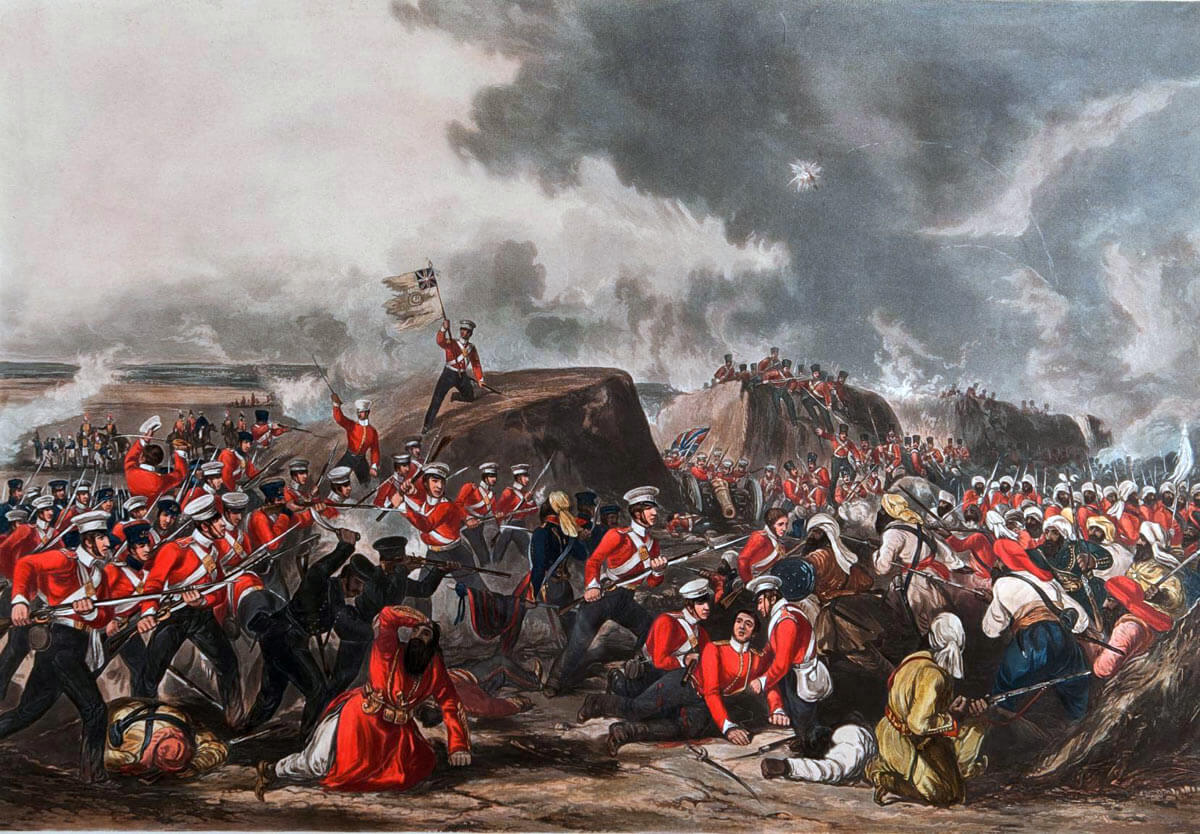 The 31st (Huntingdonshire) and 50th (Queen’s Own). The fourth, last, and decisive battle of The First Sikh War. Both officers, who were carrying the Colours of the 31st, had been killed and at the moment of defeat, Sergeant Bernard McCabe picked up the Regimental Colour and climbed to the highest point of the enemy earthworks under intense fire, and planted the Colour for all to see. 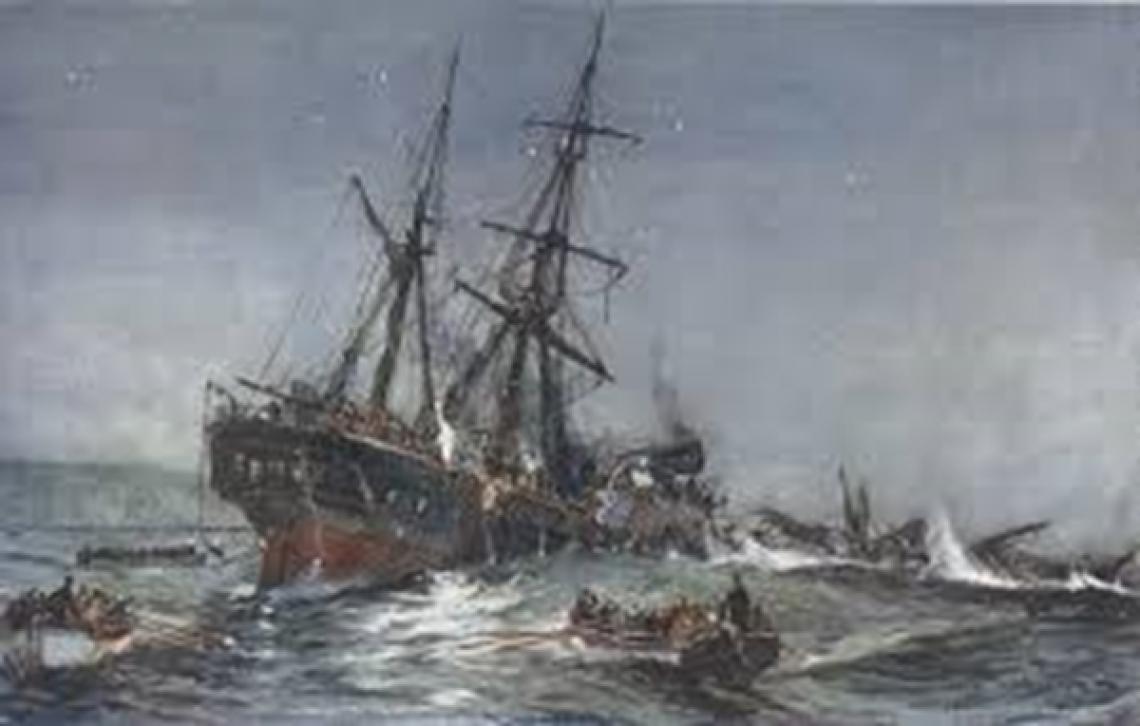 HMT Birkenhead sailed from Cork on 9th January with drafts of ten regiments on board.  The Queen’s detachment consisted of Ensign Boylan and 51 rank and file.  On 24th February the Birkenhead sailed at 6pm on a calm starlit night.  At 2am the following morning the ship struck a rock near Danger Point. Of the 467 officers and men on board, 355 were drowned or killed by sharks.Only 16 men survived.

"Camp of The 4th Division" 1855
By William Simpson 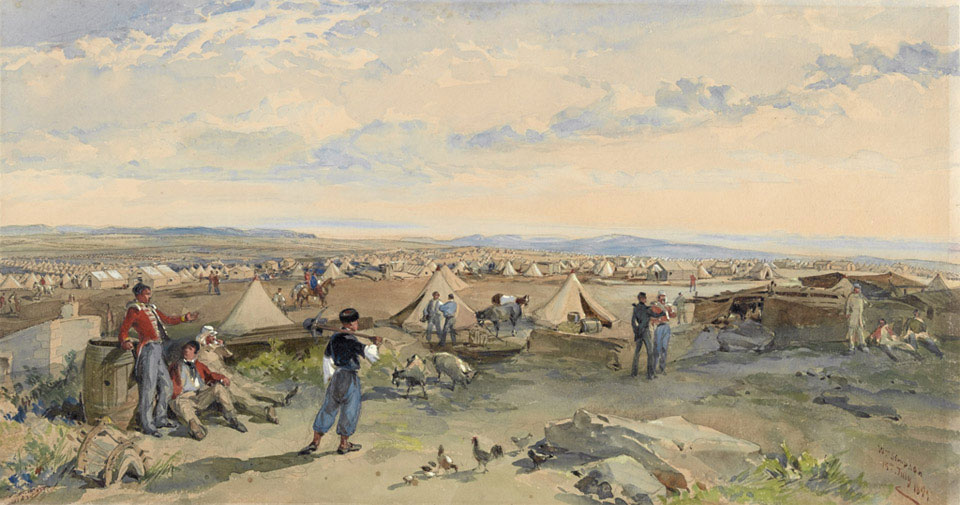 This watercolour details the distribution of the regiments within the 4th Division's camp. To the left, are the tents of the 57th (The West Middlesex), with the French camp beyond. 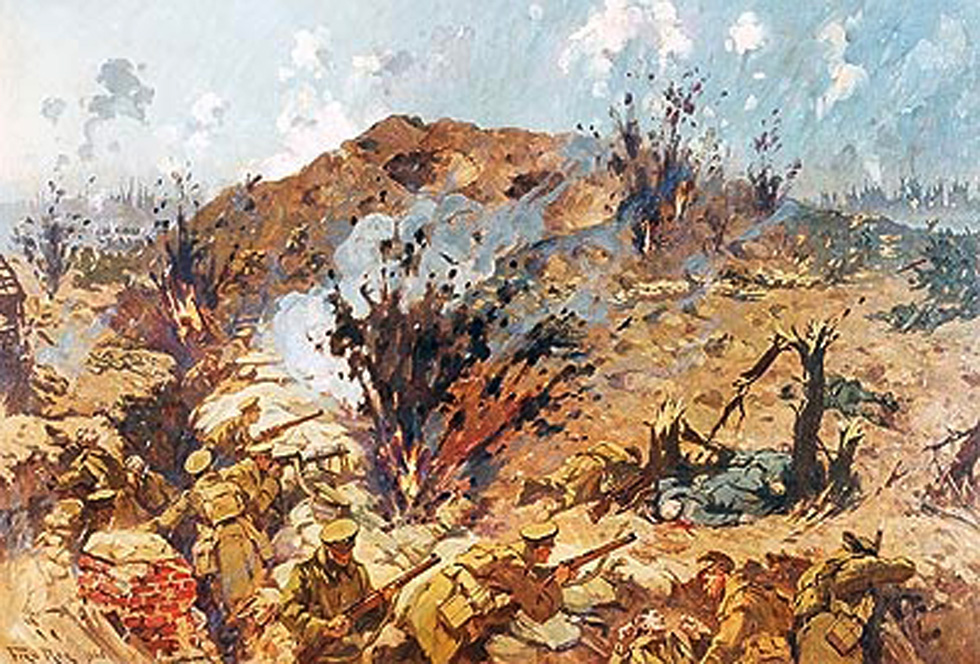 Whilst commanding a company of his battalion in a front trench of Hill 60, though wounded in several places, Lt Roupell remained at his post and led his company in repelling a strong German assault. 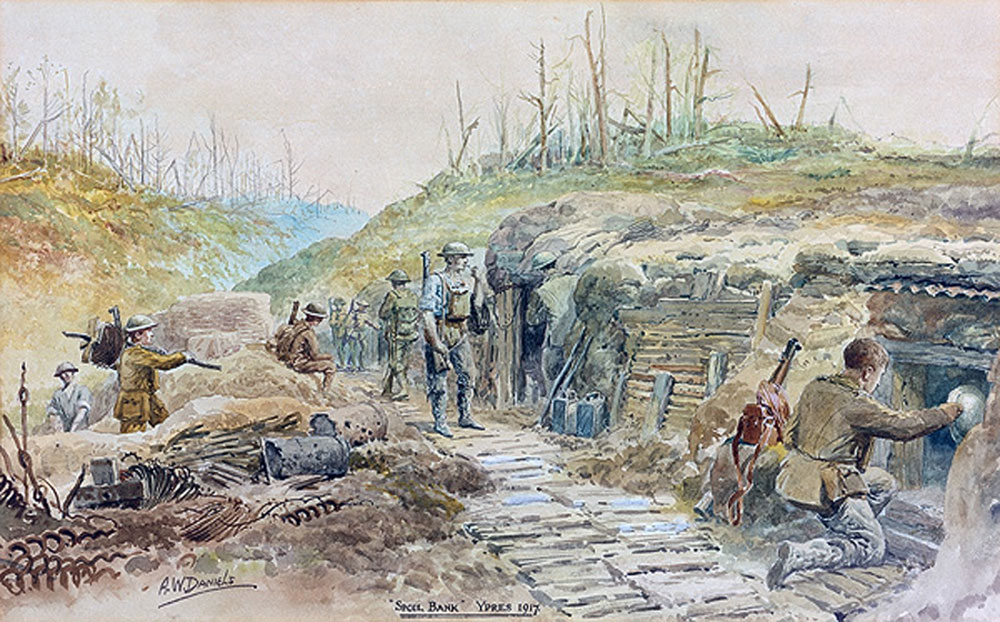 They fought at Messines and the Third Battle of Ypres on July 31, 1917 - also known as the Battle of Passchendaele - one of the bloodiest battles fought on the Western Front. 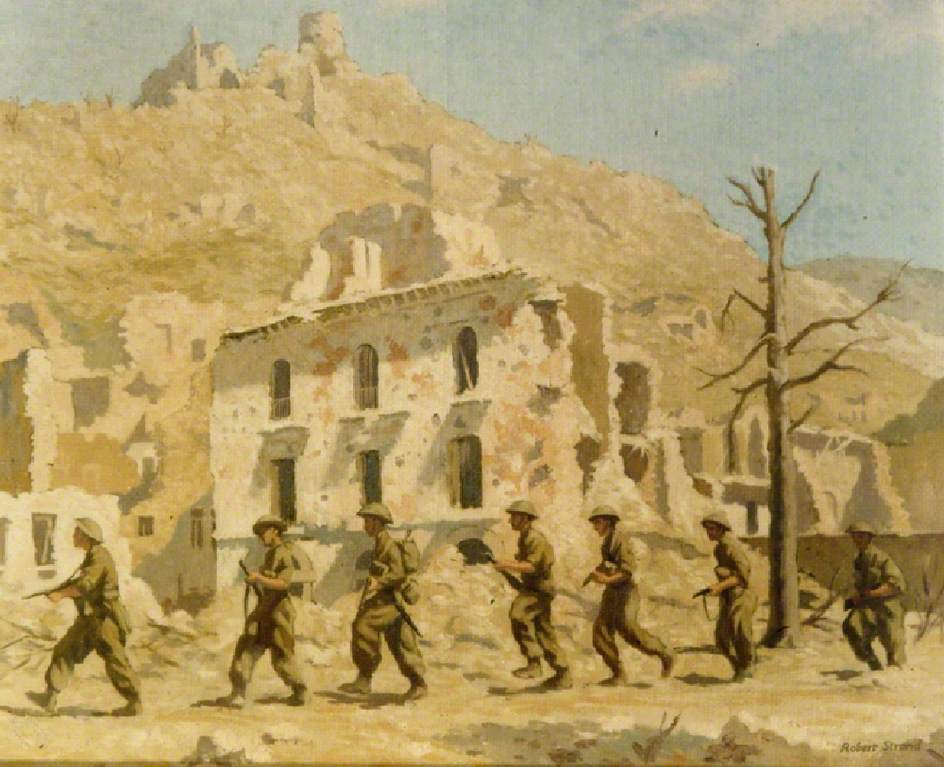 A patrol of 1/6th Bn The East Surrey Regiment entering Cassino with the Monastery above.

As part of a co-ordinated 5th Army attack, this involved the whole Queen’s Brigade with 2/5th Queen’s leading the assault up the almost vertical, in places, face of the mountain. It took 4 days to clear the mountain and occupy the small, now ruined, monastery at its summit. 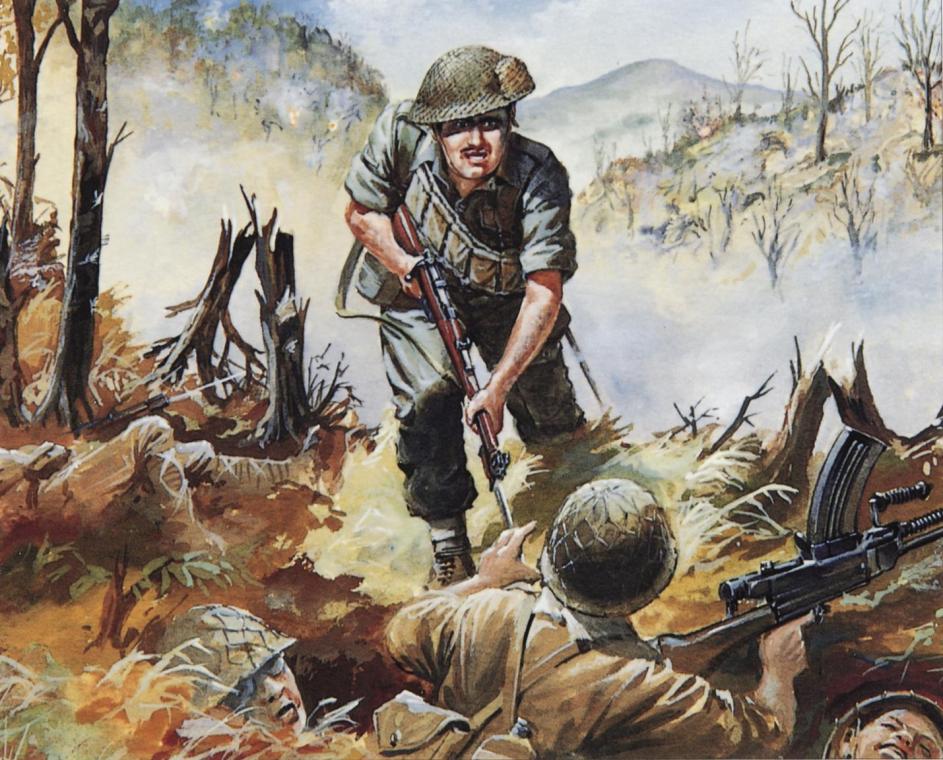 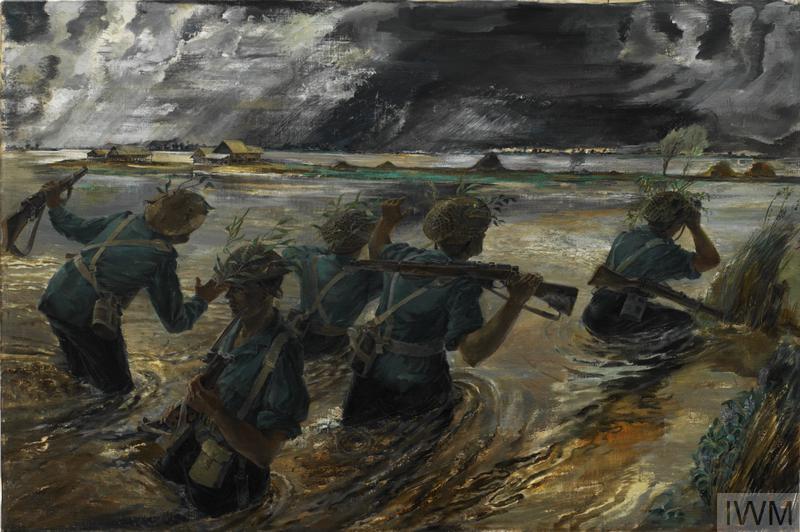 Men of The Queen's Own (Royal West Kent) Regiment making an armed patrol through flooded paddy fields during the battle.

The British created two killing fields - the first for artillery and the second using aircraft. Approximately 14,000 Japanese were lost, with well over half being killed, while British forces suffered only 95 killed and 322 wounded 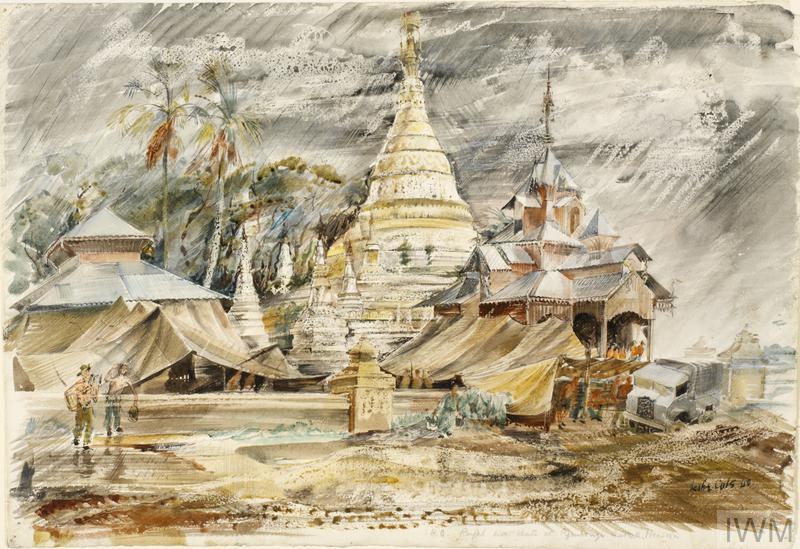 The Queen's Own (Royal West Kent) Regiment - view of a camp at a Burmese temple in driving monsoon rain.

"Presentation of Colours" 1974
By Terence Cuneo

Her Majesty Queen Margrethe II presenting Colours to the 1st, 2nd, 3rd and 5th (Volunteer) Battalions of The Queen's Regiment.