The War of the Spanish Succession - The Jacobite Rebellion

Although the Treaty of Ryswiek brought King William's War to an end it did not curb Louis XIV's ambition. Well aware of this, William increased the strength of his army and on 28 June 1701 The Royal Sussex came into being as the 35th Foot, raised by the Earl of Donegal in Belfast and originally called the Belfast Regiment, consisting not of Irishmen but Protestant Ulster Scots. 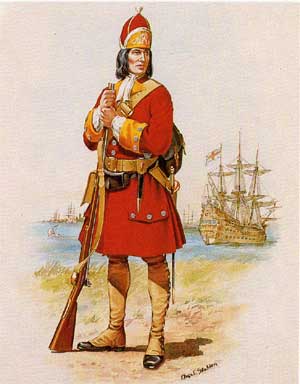 Their facings were orange and the sergeants wore orange sashes. William also gave orders for the raising of six regiments of Marines, among them, Villiers' Marines (so called because Colonel George Villiers commanded them), later the 31st Foot and East Surrey Regiment, on 1 June 1702, three months after William's death. Just before he died he had created The Grand Alliance, of England, the Netherlands and the Holy Roman Empire (Austria), against France, because Louis XIV had claimed the vacant throne of Spain for his grandson Philip, Duke of Anjou. Queen Anne, who succeeded William III, declared war on 4 May 1702, and in June the 35th Foot were warned for 'sea service', not as marines but as a seaborne land force to raid enemy coasts in Combined Operations as the Commandos did in the Second World War. Villiers Marines, given the same task, served with the Royal Navy for the next 10 years, and thereafter both Regiments enjoyed the privilege of drinking the Loyal Toast sitting down because deck beams were too low to allow men to stand up.

The first commando type raid in this war was the abortive attack on Cadiz in 1702, in which The Queen's, The Buffs, Villiers Marines and the 35th all took part. Admiral Rooke declined an assault urged by the troops commander, the Duke of Ormonde, but some Spanish galleons were captured in Vigo Bay after The Buffs had stormed a coastal battery, and a vast quantity of booty was carried off.

The 35th were detached from this expedition and sent to attack French and Spanish settlements in the West Indies, notable Guadeloupe. They returned, much reduced by disease, in the autumn of 1703. Meanwhile, in January 1703, Villiers' Marines had rejoined Admiral Rooke in the Mediterranean for their first major achievement, the capture of Gibraltar, and they fought gallantly for the next four months against determined efforts by strong French and Spanish forces to retake it. At the same time The Queen's and The Buffs had joined the army of one of Britain's greatest soldiers, John Churchill, 1st Duke of Marlborough, for his long campaign against the French. In April 1703 the Queen's and a Dutch Regiment, Van Elst's, were quartered in the small Fortified town of Tongres, near Liege, where, on 10 May they were attacked by an army of 40,000 French whose object was to destroy the army of Marlborough's ally, the Dutch Marshal Overkirk, while his units were dispersed in the Maestricht area. The French Marshal Bouffiers decided to deal with Tongres first, but by fighting continuously for 28 hours before being compelled to surrender, the Queen's and Van Elst's gained time for Overkirk to concentrate in a defensive position. and having failed to gain surprise. Bouffiers abandoned his plan. For this action at Tongres The Queen's were awarded the title 'Royal' and the mottos 'Pristinae Virtutis Memor'  (Mindful of former glory) and 'Vel Exuviae Triumphant' (Victorious even in adversity) they became prisoners of war but Marlborough negotiated their release 3 months later, and they were then sent to the area of operations in Spain.

The Buffs remained in Marlborough's army and fought throughout his campaign that began with the march to the Danube and ended with the penetration of the supposedly impregnable Ne Plus Ultra Line. They took part in the great battles of Blenheim, Ramillies, Oudenarde and Malplaquet, and it was probably in 1707 that they received the Dragon as their badge in token of their Tudor origin - the arms of Queen Elizabeth I had been supported by a Lion and a Dragon instead of the present Lion and Unicorn.

In 1707 The Queen's and Villier's Marines were in lord Galway's army in Spain that suffered a disastrous defeat at Almanza, because their Portuguese allies were stampeded by French cavalry. The war ended with the Treaty of Utrecht in 1713. 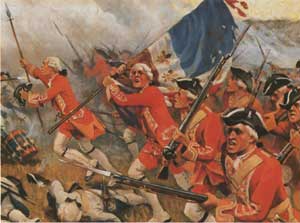 During the 27 years before this war began, The Queen's were in Canada and Gibraltar, The Buffs put an end to the first Jacobite Rebellion at the battle of Sherrifmuir in November 1715, and in 1719 paid another visit to Spain to destroy a Jacobite base. (the Jacobites wanted to put the Stuart descendants of James II back on the throne) Villier's Marines, now commanded by Sir Harry Goring and therefore known as Goring's Marines were threatened with disbandment but were saved from extinction by their loyal and excellent service in the Mediterranean and on I June 1716 became the 31st Foot. They spent most of the time between the wars in Ireland, as did the 35th.

The War of the Austrian Succession arose from a dispute between three candidates for the Austrian throne, and Britain's principal enemies were again France and Spain the Queen's remained in Gibraltar. The Buffs went to Flanders and, with the 31st, fought at Dettingen, a victory, and the last occasion on which an English King (George II) commanded his army in battle. Two years later, in May 1745, the 31st suffered 278 casualties at the battle of Fontenoy, where George II's son, the Duke of Cumberland, tried to thrust a wedge of infantry through the outnumbering French army. The French claimed a victory because Cumberland withdrew from the battlefield at nightfall and then returned to England to deal with the second Jacobite Rebellion of 1745. 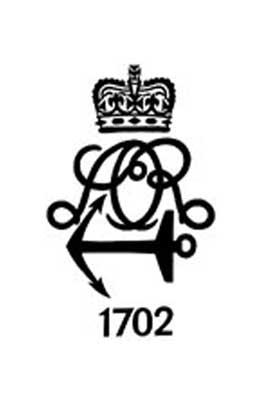 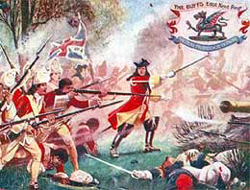 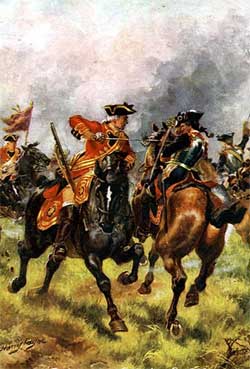 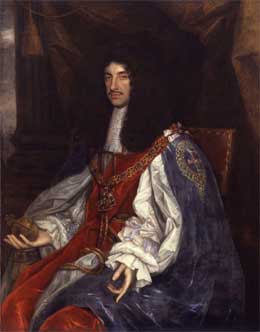 The 31st took no part because of their losses at Fontenoy, but The Buffs marched north with the Duke and were in the army that defeated Bonnie Prince Charlie.

James II's grandson, at Falkirk and Culloden in March 1747 they were back in Flanders, at Lauffeld a battle lost when the Dutch cavalry broke and fled through the lines of British infantry.

The treaty of Aix-la-Chapelle (Aachen) ended the war.